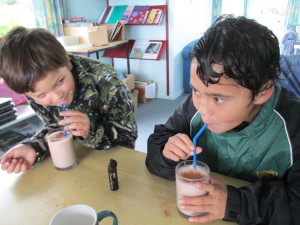 Our writers’ group are spending an extra 40 minutes most mornings working to improve their writing style. So far we have concentrated on the overall structure: Having a clear beginning, middle and ending. AND look how well they are doing!

Yesterday our writing group went in the staff room and invented milkshakes. Our one was scrumptious and delicious.

Awatea and Antony went second and  KennyKade and  Demitrious went first. Me and Mason went last. It was boring waiting. We put a whole teaspoon of vanilla , two tablespoons of Nesquik  and two dessertspoons of  ice cream in our milkshake.

It was  yummy because we got to  test each others  milkshakes!    Awatea’s was yuck because it had too much orange chocolate chip ice-cream.

Guess what the writing group did on Thursday? They invented milkshakes up in the staffroom.

Demitrious and Kenny-Kade got to start first with making and tasting a milkshake. Awatea and Antony  were second. Mason and Reef went last so we were jealous only because we were last but when it was our turn we got all the ice-cream.

Yesterday me Antony, Kenny, Demitrious, Reef and Mason made milkshakes in the staff room.

Kenny and Demitrious went first. They put cocoa, two bananas and chocolate ripple ice-cream in there’s. Then Mrs.A blended their ingredients together. Then me and Antony went second. We put nesquik, vanilla essence and orange chocolate chip ice-cream in ours. Antony spilt the milk on the table but Mrs A just blended our ingredients together. I was worried about what it was going to taste like. Finally Mason and Reef, they put cocoa, vanilla essence and  chocolate ripple in their milk, then Mrs A blended their ingredients. Then we all got to taste each others.

I don’t know why but ours was best.

About the Author: Carole Archibald

Search for an Author